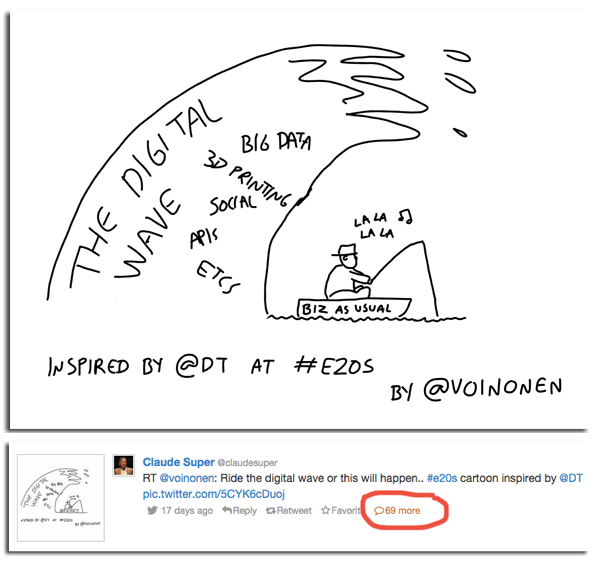 Example of an event cartoon tweet from a tech conference couple of years ago.

Graphic recording is not just drawings on a huge piece of paper or a whiteboard. It can also be a completely digital process which means that it can be harnessed to spread the word about the event and the insights shared at the event to a much wider audience.

Traditional graphic recording is about drawing a lot of stuff on one big piece of paper. This is usually unshareable after the event because a) it’s on paper b) there is way too much information on it (no-one who hasn’t been at the event will have the cognitive energy to study a detailed visual without a coherent story).

Digital graphic recording is about breaking information into smaller chunks: cartoons. This makes them extremely shareable on Twitter, via email etc. During and after the event. If you have an event hashtag then you can use these types of visuals to really boost your event’s online reach.

They can also be stitched together into a coherent longer piece: infographic, poster, PowerPoint presentation or even an animation (although that will often take a day or two to produce). So you can really have your cake and eat it too. 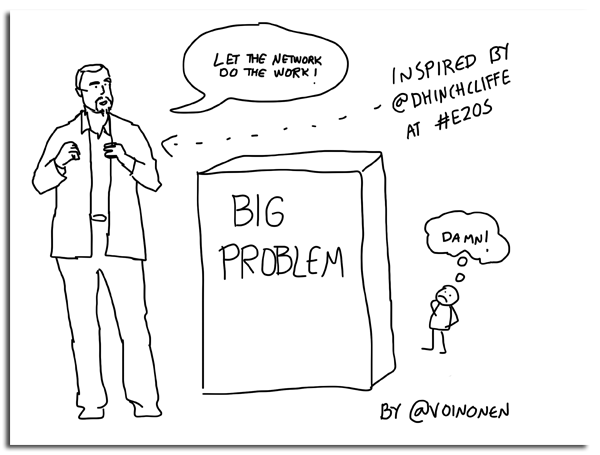 Since images can be easily detached from the context online I added the following words in the drawings themselves (the hashtag is from the Enterprise 2.0 Summit).The information on the image follow the following formula:

This way the cartoon is always associated with the speaker who inspired the cartoon and the event where it originated. And by saying the image is inspired by someone it’s clear that it’s my interpretation of what has been said.

Event cartoons are shared online for a long time… 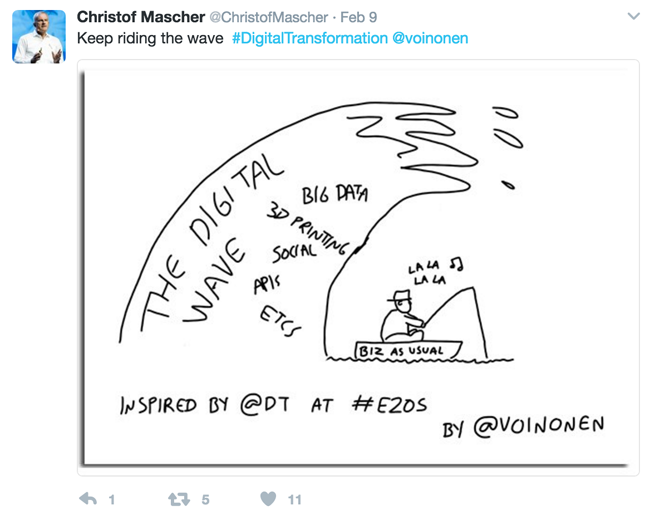 Event cartoons get regularly discovered by new people on Twitter and elsewhere on the internet. This starts a new wave of online shares. Since the hashtag is on the event cartoon  as is the speaker Twitter handle it sends traffic their way as well. How cool is that?

After the event people often start emailing/direct messaging me to ask whether it is ok to use the cartoons in their blogs/newsletters.

All this is pure organic reach – no need to pay or boost anything.

Will all cartoons go viral? Of course not. On average 1-2 cartoons out of 10 really take off and have a long online afterlife. But by drawing many images you increase the chances of viral success. If you only produce one image or one video then you are putting all your eggs in one basket.

The event speakers get an additional online boost when their insights are shared in cartoon format. By adding the speaker’s Twitter handle (and mentioning them in the tweet) I make sure the speakers share it as well (it is very difficult NOT to tweet a cartoon about yourself). Since many of the speakers are big names also on Twitter their tweets will spread far and wide.

Imagine how this can expand your event social media reach. Big name with large follower base + cartoon with the speaker = whoosh.

I’ve yet to meet a speaker who wouldn’t have liked me and my colleagues sharing their insights in cartoon format. In a way it’s also a way of thanking the speaker and acknowledging their effort.

Added bonus: event sketches aren’t usually a problem from a brand perspective. (Often when a big corporation produces visual content they can be a bit suspicious of visuals that aren’t stock photos or slick corporate videos).

So who does event cartooning? 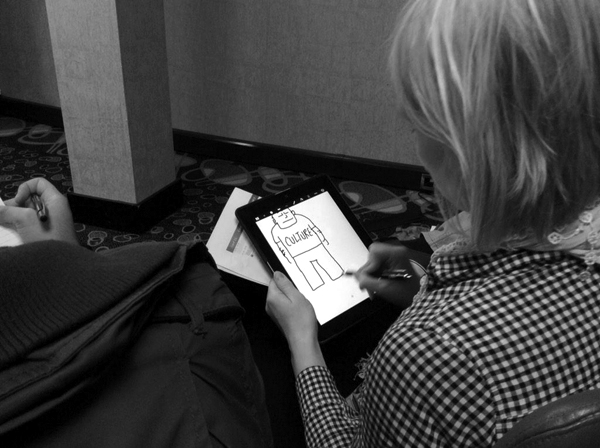 Photo of yours truly (tweeted by an event participant sitting behind me – thanks Simon Thompson!)

I think graphic recorders who do event scribing are missing a trick by not turning some of their key illustrations into tweetable visuals. This way they could help the event reach a wider audience online – as well as make the event stand out for participants and speakers. And while I think working digitally makes more sense at events than using pen and paper, even analogue graphic recorders can try event cartooning: just take a photo of the drawing and post it online (the quality isn’t great – but at events speed is of importance).

Event organisers (conferences, seminars, workshops etc) are not the only people who should look into the power of cartoons – content marketers could also make use of event visuals. The ex-digital producer in me sighs every time I see good content going to waste.

Talk by Laszlo Bock (head of HR at Google):
http://businessgoessocial.net/blog/2015/03/15/cartoons-from-nesta-futurefest-2015-conference/

Frederic Laloux’s talk at the RSA (about his book Reinventing organizations):
http://businessgoessocial.net/blog/2015/01/29/frederic-lalouxs-rsa-talk-reinveinting-organizations-cartoons/