Public services have to be efficient, right? Well, yes. But there is a major caveat… What if I told you that our quest for efficiency has actually made public services more ineffective? And in some cases less humane?

This animation was commissioned by a group of academics and public sector administrators who want to reform the way we (in the UK) commission and deliver public services. There’s also a shorter version of the animation – it goes straight to the solution without describing the problem.

The key idea of the animation is that when you are trying to solve a complex problem like homelessness or obesity, you should use practices that can actually deal with the complexity of the issue. Your guiding star is effectiveness (the impact), not efficiency.

Efficiency and effectiveness – what’s the difference?

The difference between a single minded focus on efficiency and effectiveness is like delivering, say, 100 000 diet meals for 100 000 overweight people. The way you deliver the meals might be a logistical masterpiece: fast and efficient. But it probably does not solve the problem of obesity. It  reminds me of this quote by the famous management consultant Peter Drucker:

“There is nothing worse than doing the wrong thing well.”

However, the thinking in the past decades has been that you can tackle all problems with neat, siloed processes. These processes then get constantly measured (metrics) to make them more efficient. But somehow the measuring of the trees often prevents us to see the state of the forest… In other words we have been “doing the wrong thing well”.

As a creative storyteller I love the challenge of explaining something that might sound abstract and dry, but that has a big impact on our lives – it’s one key reason I started doing this kind of work in the first place! Also, I never say no to projects where I get to draw about complexity :). 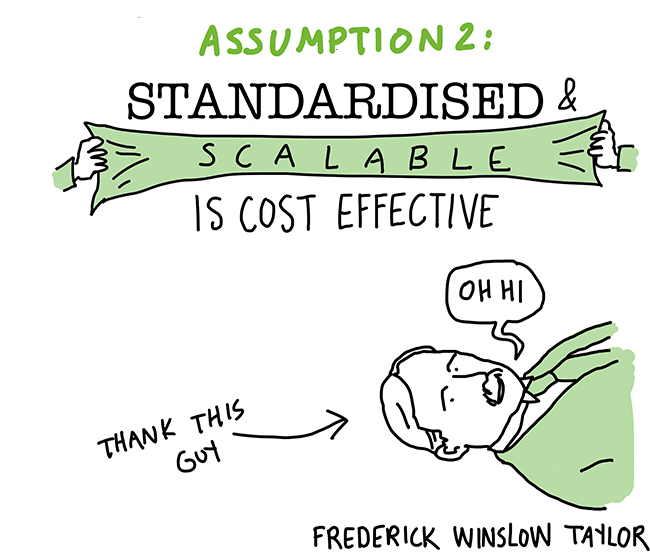 The first part of the animation is about the damage Tayloristic efficiency thinking can do when applied to public services.

Crudely put, Taylorism is a way of thinking that is best suited for optimising systems – classic example is a factory production line. It works when the process or system you are looking to make more efficient is simple – like a factory assembly line. It can even work for complicated projects: building a Ferrari has many moving parts, but at least those parts don’t constantly interact with each other in unpredictable ways.

The problems start when the issue you are trying to solve is not a simple glitch in the assembly line, but a complex system with a lot of interacting parts.

I wanted to capture this problem in the first part of the animation because a lot of people still think that “surely efficiency is good – we are saving money, aren’t we?”

Except that we probably aren’t if we are dealing with a complex problem – in fact we might be doing the exact opposite! Wasting money because we are approaching the problem the wrong way. 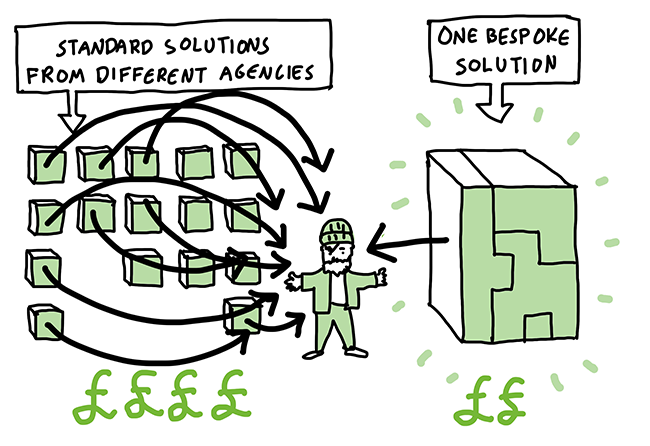 And it’s not just about wasting money. In our “efficiency madness” we can also accidentally cause human misery on a grand scale. This is why the theme of the animation is so important. I think many people intuitively think that producing, say, care for the elderly, with same faceless “efficiency” measures as the factory that produces tins of beans is wrong. But until now, there hasn’t been that much scientific thinking or practical methodologies to back up a different approach.

(By the way: if you want to see a really interesting health care related example about ditching the Tayloristic efficiency mindset have a look at the Dutch neighbourhood healthcare provider Buurtzorg). 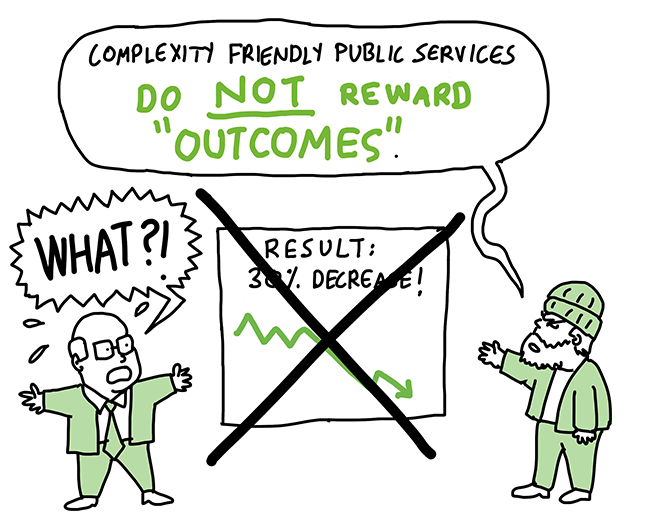 The second part of the animation is about a more complexity friendly approach of delivering public services called Human Learning Systems.

Human learning systems is part of a bigger trend in business and organisational thinking. You are probably already familiar with terms like agile, design thinking, human centred design etc. These are all approaches that take into account the unfortunate (?) fact that the world is not always predictable and linear. People who are trained in this kind of thinking and working know that a solution that works in one context, might not work in another. 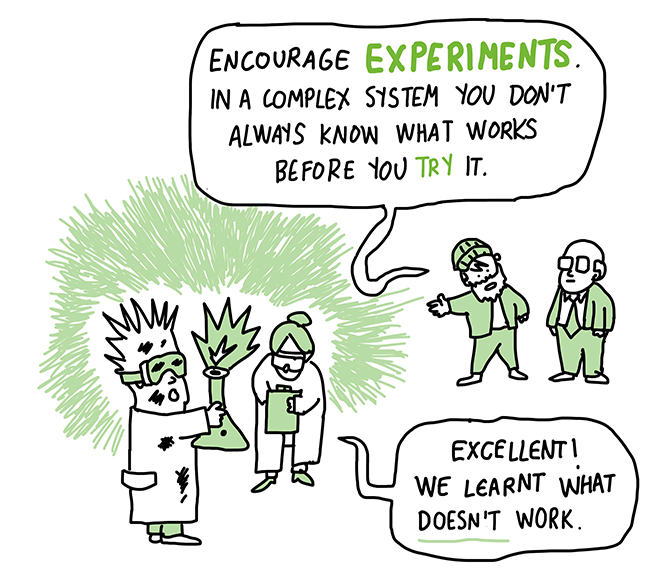 This kind of approach promotes experimentation and learning instead of strict processes and thick operational manuals.

This is a MASSIVE culture and mindset shift. Generations of managers have been trained in a complete opposite way of thinking both in public and private sectors.

I’m hoping the animation will at least make you curious about the possibility that things can be done differently. A short animation like this can never explain everything so I encourage you to do your own research into the theme by for example checking out the human learning systems website and googling terms like complexity and systems thinking.

PS. This is not the first time I tackle complexity in organisational context: check out my old cartoon infographic Why organisations must change. Even though the main character is a CEO of a corporation the same issues exist in the public sector.

And if you are interested in my visual explanations about the culture shift that needs to happen so that our organisations can better with complexity: have a look at my crowdfunding project The Confused CEO’s Guide to 21st Century Organisations.