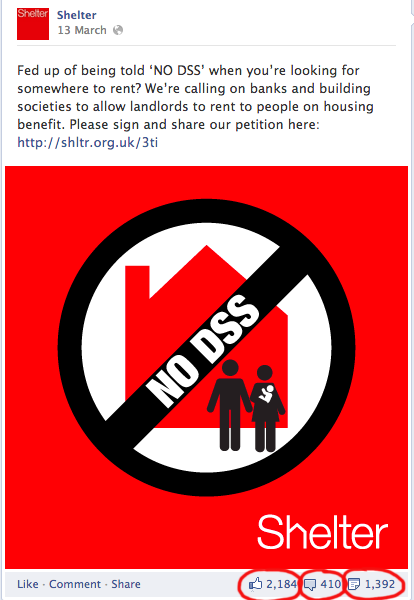 An example of a  Shelter graphic.

Shelter is a UK-based charity that works to alleviate the distress caused by homelessness and bad housing. I’ve long admired their clever use of graphics and “mini infographics” (simple, short visual explanations) that get thousands of likes and shares on Facebook.  Rather than use random pieces of visual content they’ve invested in a consistent visual content marketing strategy that supports their campaign goals. Thomas McCarthy, Campaigner for Shelter, kindly agreed to tell us a bit about how they create the visuals and give you some tips on how you, too, can seek to replicate Shelter’s success.

When do you use (mini) infographics in your campaigns?

An infographic will be briefed when we need to make the housing policy seem more accessible or because it simplifies something extremely complicated (for example, our bedroom tax infographic, or the graphics in our policy report A better deal). Or it may just be the most powerful way to get a message across.

Facebook seems to work well for your infographics. What other channels do you use?

We’ll always create our social graphics and infographics with one channel in mind, and Facebook is normally the most effective platform. It’s the one that works best for visual imagery, it’s where people are most likely to share and engage with your content, and it’s where our most active online supporters are.

However we’ll also branch out, creating graphics specifically for Twitter, our website, or our supporter emails. Twitter’s better for shorter sharper messages and smaller graphics. The website is where we host longer, more detailed infographics, often for more policy based audiences, and in supporter emails the graphics will be tailored to a more engaged audience (for example the Homes for London graphic), where they have a better knowledge of our campaigns or the issues.

If the graphic does particularly well on one platform we’ll sometimes spread it across others. And quite regularly we’ll cross link our website or supporter emails to particular graphics on Facebook, asking supporters to share them for us. This is when we get the really big numbers, as we can call on thousands of our supporters to help us spread the word.

Do you use a design company or do you produce the graphics in house?

It varies from campaign to campaign. The majority of our graphics are done in house through our Studio and Design team, however for larger campaigns we sometimes go to other agencies. Most recently we’ve been working with Blue State Digital, and we’ve just launched a campaign featuring Leagas Delaney’s creatives. The creative for this was produced pro bono by Leagas Delaney and is being primarily used for flash ads across the internet.

How did you find your agencies? What criteria did you use for choosing them?

Again – varies from campaign to campaign and team to team. For larger projects the agency will have to go through a tendering process, and there we’ll look at a whole host of criteria.

But for smaller ones it’s about the past quality of their work; recommendations from other organisations or teams within Shelter; or their ability to meet a specific need / comms requirement. For example we recently hired Make Productions for our 9 million renters campaign video (animated infographics -ed.). I was really impressed by their previous work with Stand Up To Cancer, and they had a style I thought would work particularly well for that campaign. It ended up doing well, and through a mixture of seeding and online sharing, it reached almost 60,000 views.

Can you tell us about the design process?

I guess like most charities, the biggest issue we face is there are so many messages to get across with every campaign. It’s so tempting to put everything in, to show people just how dire the situation can be. But when you’re producing an infographic a simple message is one of the biggest factors in achieving success on social media. One of our most successful ever graphics (see example A) was incredibly simple, but got almost 2000 shares. If you can’t get what you need into one graphic, try producing a number of graphics that can sit by each other to tell a story (example B). 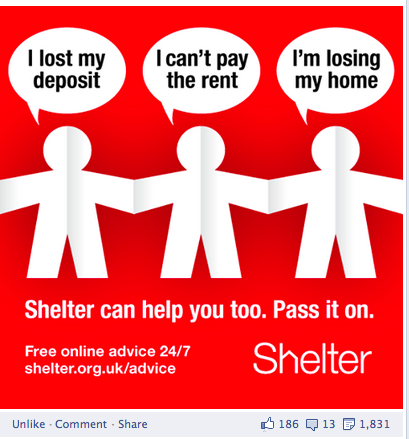 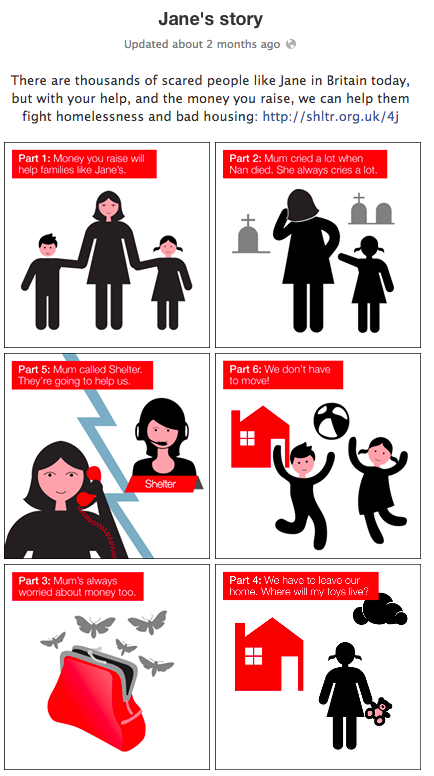 I guess the other challenge is capacity. Infographics are time-consuming – not just producing them, but also briefing them in and getting sign off. Making sure you get the brief right and agreed up front makes a huge difference in getting content signed off first time.

Once we’ve got agreement that an infographic is the right type of content, we’ll assess the channel, audience, comms task, key messages and tone, and draw up a brief for the design team.

Where there’s time they’ll come up with a few ideas on how to present our message, as drafts, and we’ll select the ones that are most appropriate. It’ll get designed up and, fingers crossed, signed off.

In an ideal world we’ll have about a week, maybe a bit more to get the graphic produced. This gives the design team time to dream up different ideas, and get proper sign off. Other times though there’ll just be a day, or even less. It’ll normally involve one member of the Campaign team, a designer, a copywriter, and then someone more senior to approve it all. If it’s being produced externally we’ll normally run it past the Brand team too.

What kinds of written guidelines do you use with your external designers?

The main thing will be the creative brief, and that will have the individual requirements for each campaign. The only other thing which also gets passed on is the Shelter brand guidelines, which has developed over a number of years. This contains all the necessary information on our tone of voice, style, design guidelines, and where necessary, exact design specifications. We have a fair bit of freedom in our branding however so the majority of the most relevant information will be held in the brief.

What tips would you give organisations that are considering using simple infographics/single fact images in their content marketing?

Work out what one message you want to get across with the graphic. Once you’ve got that think about the action you want people to do after seeing it, and specifically who the audience is you’re targeting. They’re the key factors in achieving success.

Also consider why people engage with content on social media. People share things that either strike a chord with them, or that they think will make them look good by having it on their wall or feed. Therefore try and think, will people want to put their name by this? If you wouldn’t, then chances are they won’t either.

Thomas McCarthy is responsible for email supporter journey management, London-based campaigns and digital campaigning at Shelter. You can follow Thomas on Twitter @tmsmccarthy

Thanks, Thomas! Since this blog is about visual communication, here are more examples of Shelter’s graphics and infographics. And here’s a quick summary: