Stupid or smart employees? – Sketchnotes from a talk by Laszlo Bock

Couple of years ago I went to a talk by the (then) head of HR of Google Laszlo Bock at my alma mater London School of Economics (he was plugging his book Work Rules – Insights from inside Google that will transform how you will live and lead).

One thing that caught my attention in that talk was the concept of emergent leadership. Bock told us that Google wants to recruit people who can take the initiative to lead – no matter what their position in the organisation. In an interview in the Washington Post he says:

When I joined Google, we used to look for very traditional outward metrics or indicators of leadership when we were hiring. What we discovered was our best leaders actually weren’t necessarily captain of the football team or president of the chess club. Instead our best leaders were the ones who, when they saw a problem, were conscientious enough to and step in and fix it — and low ego enough and self-aware enough to then step out and let other people fix the next phase. 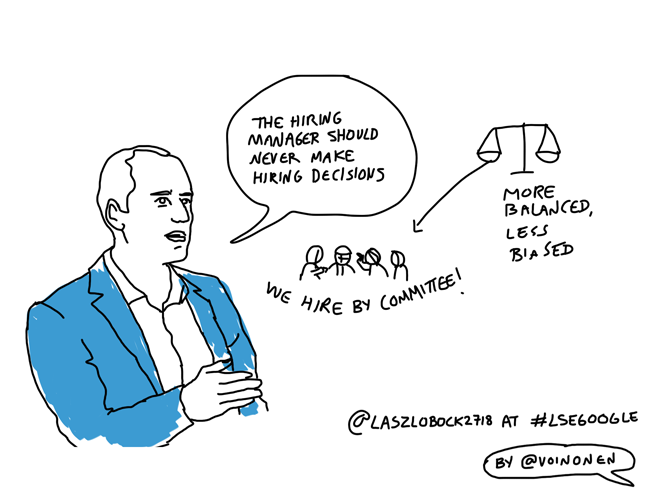 Traditional corporate idea of leadership assumes that only managers can, and should, lead. There has always been an opposing view to this, however. The philosopher John Stuart Mill believed that worker-run and owned cooperatives would eventually displace traditional capitalist (capital-managed) firms in the competitive market economy because they are more efficient have a stronger incentive structure. Well, we are not quite there yet. But the rise of agile teams and intrapreneurship shows that there is now a more open attitude towards self-organising within the (otherwise) traditional companies. Holacracy and other flatter organisational models are a more extreme version of this type of thinking.

These two approaches to employee leadership also reflect a fundamental difference in worldview that for example Theory X and Theory Y exemplify. Theory X assumes employees are lazier, less intelligent and more self-interested than managers. This means they need more hands-on supervision. Theory Y assumes employees are motivated, have a brain and don’t need that much supervision.

I have experienced both approaches to work.

I used to work for an organisation where employees were expected to lead. On my first day my boss told me that ‘if you want something to change, you campaign for it. If you get enough people behind you we will do it’. After a few years in an organisation that expected initiative and ability to lead from its employees I joined a more traditional organisation. Same size, same sector but completely different organisational philosophy. In this new workplace I was suddenly back at the “kids’ table” because I didn’t join the organisation as a manager. If I had an idea for an improvement there was no real way of taking it forward. Or if I was the expert on something I couldn’t brief the senior management on it – instead my manager briefed them (even though he knew nothing of the topic). People working for the organisation were smart and dedicated. But the idea of how an organisation should work and how it’s structured was nicked from Frederick Taylor and ‘scientific management’ – not a great approach for an organisation of knowledge workers trying to operate in a fast moving world.

After this contrasting experience I became interested in organisations and people in them. And an advocate for a mindset that treats employees as adults.

There is an interesting technological development that is fuelling and supporting emergent leadership also in fairly hierarchical organisations. The rise of enterprise social networks like Yammer has accidentally created a space for emergent leadership to appear. Suddenly there is a place for employees to form groups where they can help each other, find information and even coordinate smaller projects.

I used to work as a consultant advising organisations on how to use these tools and the greatest joy for me was to meet the “enterprise social enthusiasts”. These were usually non-managers who had completely embraced the servant leader mindset. They weren’t leading because it would advance their careers, but because it would help the organisation and their colleagues. And they didn’t really want to lead forever. What they really wanted was to other people to “get it”, too, and then help take the network to the next level. They are the poster boys and girls for Theory Y trapped in Theory X organisations. The kind of people Laszlo Bock was after. 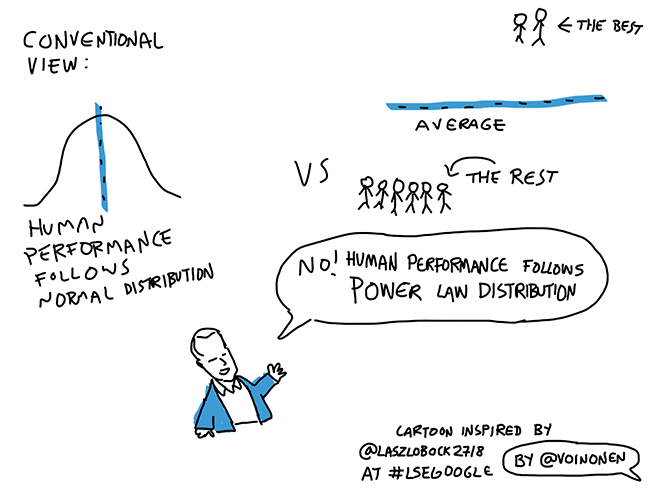 How can we make grassroots leaders visible?

How would you make the work these people do visible to senior management in companies that are not Google? How could we make them see what these people could do, if they were given a bit more freedom? 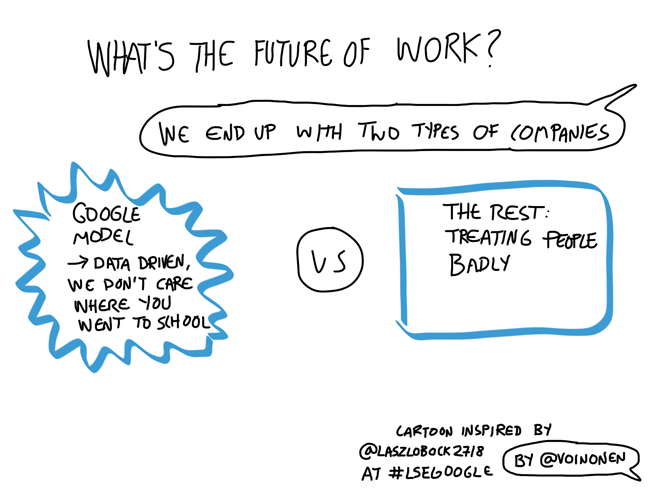 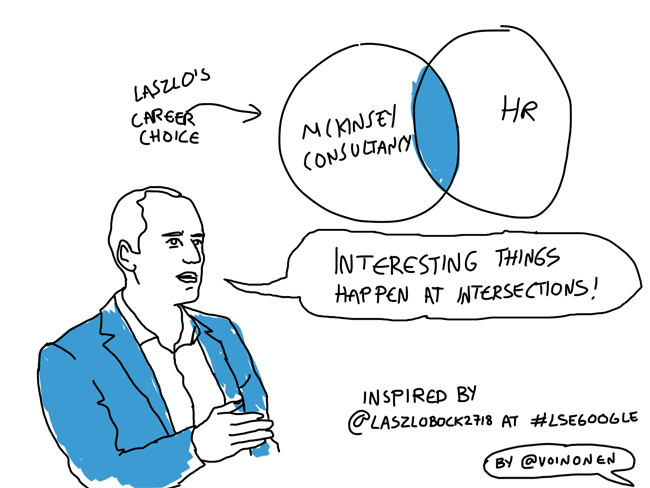 This is an edited version of an old blog post from my other site Businessgoessocial.net. Apologies if the sketchnotes seem a bit random and don’t seem to fit the text. Bock’s talk inspired me to do my own thinking :).